Author Katherine Marko shares this wonderful article about Proper Pooping!  Until I became a Colon Hydrotherapist, I never ran across this info so I am very happy to share it with you.

“The modern day toilet, while certainly convenient, has one major flaw: it’s built for sitting. And while sitting to eliminate is considered “civilized,” there’s another position that may improve how you poop. And better pooping means less  bloating, straining, hemorrhoids and constipation.

A little history behind sitting

What if I told you there was a more efficient way to poop? The bowel is the body’s main elimination organ, yet amongst many Americans today, this central elimination system is compromised by something as simple as the position you choose for defecating. If you have less than three bowel movements a week, then you may be one of the millions suffering from constipation. So, before constipation gets the best of you, maybe it’s time to go back to the beginning.

The first seated toilets ever built were used primarily for royalty and the disabled. However, after the advent of indoor plumbing in the 1800s, the water closet was adapted with a “porcelain throne” to fit the average home. That meant common folk could now poop in a “civilized” manner — just like the queen. But prior to that, our ancestors were squatting to relieve themselves, much like any other mammal. In fact, squatting is still the primary method for pooping in many cultures. Just visit any European, Asian or Middle Eastern country and you’ll soon discover that many public bathrooms consist of squatting toilets.

If you don’t know what a squat toilet is, picture a shallow, porcelain basin mounted in the floor. But, personally, I have stumbled across many squat toilets in other countries that don’t even include a basin — just a hole in the ground and two footprints on either side for positioning. Generally, you plant both of your feet on either side of the basin and crouch. The end result is an easier and more complete defecation, provided you can get past the open stalls. 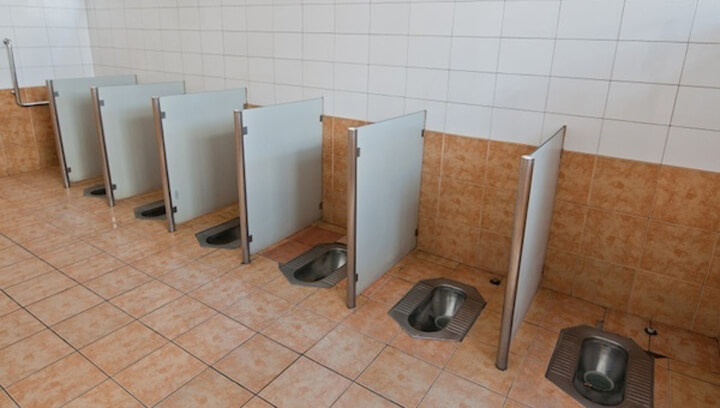 (Photo courtesy of “Do It Yourself”)

So while most of Western society would rather sit, much of the world’s population is still squatting, particularly in rural settings. Here are some examples:

As foreign as squatting may seem, our bodies are better designed to defecate during a squat. Unlike sitting, squatting actually straightens the rectum, relaxes your puborectalis muscle, and allows for complete emptying without straining. Squatting also prevents fecal material from sitting and hardening in your colon, while also preventing toxins from accumulating in your intestinal tract.

A study that compared three positions during defecation found that the most common position used by modern man might be causing unnecessary straining. Israeli researcher Dov Sikirov asked 28 healthy volunteers aged 17 to 66 years old with normal bowel function to poop while squatting over a container. The study goal was to compare the straining forces applied when sitting or squatting during defecation. Participants were asked to use a digital timer to record the net time needed to empty their bowels satisfactorily while defecating in three alternative positions: sitting on a standard-sized toilet seat, sitting on a lower toilet seat and squatting. Six bowel movements were recorded by each participant and the study confirmed that the squatting posture worked best — hands down. Squatting simply allows for better emptying when compared to sitting.

For some, sitting on the toilet can make defecation a longer and more painful process. Struggling to eliminate hard poop can cause swollen and inflamed veins — also known as hemorrhoids — in your anus and lower rectum. But the good news is, hemorrhoids can heal without coming back when the squat posture is adopted for bowel movements.

Even urinary flow can be stronger and easier for women who squat to urinate. Rather than sitting or hovering over the toilet seat, the bladder empties much more completely during a squat. Squatting may also help reduce occurrences of urinary tract infections, in both frequency and intensity.

It’s even thought that sitting on toilets may be partly to blame for the higher rates of colon and pelvic diseases among prosperous Western countries, suggests a report in the Israel Journal of Medical Science. In fact, according to research on colorectal cancer, the countries with the highest rates of colon cancer are the U.S. and Canada, where sitting is the position of choice. Among the countries with the lowest rates of colon cancer is China, where squatting is the cultural position of choice.

Would you consider squatting?

Look, we can discuss the benefits of squatting until we’re blue in the face, but is that going to make you change the position in which you currently poop? For some, maybe — particularly if you’re experiencing painful bowel movements and straining during defecation. But realistically, the idea of squatting on a toilet seat not only seems barbaric but also doesn’t work logistically for anyone carrying a few extra pounds, bad knees or vertigo. Not to mention that modern day toilets just aren’t wide enough to withstand squatting. 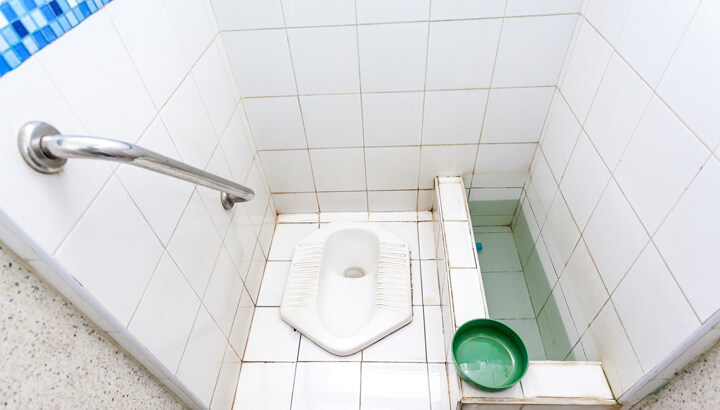 Still, squatting does make sense. In the squat position, gravity does most of the work for you. The torso presses against the thighs and naturally compresses the colon, providing gentle pressure from the diaphragm. The “kink” at the entrance to the rectum unlocks, helping to prevent constipation and other associated health risks. The colon has an inlet valve (the ileocecal valve) and an outlet valve (the puborectalis muscle). Squatting closes the inlet valve to keep the small intestine clean, and also opens the outlet valve to allow waste to pass freely. But sitting erect on the toilet actually defeats the purpose of both valves, making elimination difficult and incomplete, while passing fecal matter into the small intestine.

While squatting is the most natural position, it can also be hard and uncomfortable for some. So rather than installing squat toilets in your home, there’s an easier solution for those who want to poop fairly effortlessly — a toilet stool.  In short, toilet stools like the Squatty Potty are used to lift the feet during elimination.

Although using a stool may not allow your body to move into a complete squat, it does provide a healthier toilet posture, thus relaxing the puborectalis muscle. And a relaxed puborectalis muscle means effortless elimination without straining. Why not give it a try with a simple foot stool? You have nothing to lose, other than constipation.”